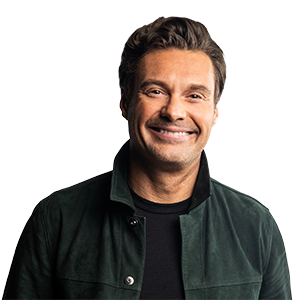 Ryan Seacrest is North America's number one music radio host with a weekly audience of over 20 million - including you!

Broadcasting from his E! Studios in Hollywood, Seacrest focuses on all aspects of the entertainment industry, highlighting and interviewing top talent from the worlds of music, film and television. You can visit all his online platforms via the links below to connect and interact with him and his co-hosts, Sisanie and Tanya Rad.

In addition to his radio show, Seacrest is the host of American Idol and co-hosts Live with Kelly and Ryan. He also hosts and produces E! News and its red carpet awards show coverage and serves as an executive producer and co-host of Dick Clark’s New Year’s Rockin’ Eve with Ryan Seacrest. He's been nominated for an Emmy® award in the “Outstanding Host for a Reality or Reality-Competition Program” category for his work on American Idol, and has also hosted the live network broadcast of the Emmy® awards show.

He's a global superstar and he's on your radio in Thunder Bay!

Don't miss On-Air with Ryan Seacrest for Uniform Pros, weekday evenings from 7 to 11, and only on Thunder Bay's Radio Station, 91-5 CKPR!